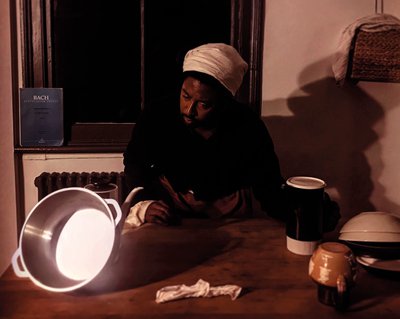 The earliest known work by the Spanish painter Diego Velázquez is a scene imagined from the Bible, The Road to Emmaus, in which Christ appears to his disciples in the background of the painting.

Like so many other individuals, there are no archival records to identify the woman at the heart of this painting. Its title in Spanish is 'La Mulata', and the domestic servant it depicted could have been enslaved, formerly enslaved or descended from enslaved people.

The religious setting is particularly significant, because the theological status of enslaved Africans was controversial. Catholic theologians largely agreed that the enslavement of Christians should not be permitted; at the same time, an argument used in favour of enslavement was that it would lead to the conversion and thus ‘salvation’ of more Africans.

By placing a Black female servant as the centrepiece for a Biblical scene, Velázquez (who himself owned at least one enslaved person in his lifetime) was clearly making a statement, but it is possible to interpret this image in very different ways. Was Velázquez reinforcing domestic and religious hierarchies or subverting them?

Diego Velázquez, 'Kitchen Maid with the Supper at Emmaus', 1617-1618, National Gallery of Ireland.

Renaissance Skin · Kitchen Maid with the Supper at Emmaus