Kathleen returned to the University of Cambridge on Wednesday 8 November for the next CRASSH event in the Imaginative Things: Curious Objects 1400-2000 seminar series, with two speakers presenting on feathers.

Dr José Ramón Marcaida discussed birds-of-paradise and the global transmission of both dead specimens and knowledge about the bird in the early modern period. No living specimens of birds-of-paradise were ever seen by Europeans in this period, and the dead birds were sold by indigenous trappers, who had removed the feet in the process of stuffing them and preparing them for transport (often with the sweet scent of myrrh and cloves). This led to widespread belief in Europe that the birds were legless by nature, living in permanent flight as they moved between the celestial and terrestrial realms, feeding only on air. 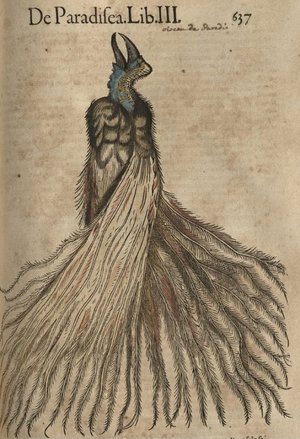 Dr Marcaida focused on an early account of this bird in Gonzalo Fernández de Oviedo’s Historia general y natural de las Indias. Oviedo was in Hispaniola in the Caribbean when he received a bird-of-paradise specimen from a sea captain who had obtained it in the Moluccas Maluku Islands) in the East Indies. Dr Marcaida examined the problem of the limitations of visual representation in both text and art, as writers and artists struggled to capture the chromatic range of the bird’s colours and the particular details of its feathers. Oviedo even commented that this ‘most admirable bird ever seen’ could not really be represented accurately by any painter, sculptor, or writer. Who could be a ‘reliable witness’ regarding natural history knowledge and geographical aspects was an issue that was also considered. Oviedo was viewing a bird from the East Indies in the West Indies, later sending the specimen to Peru. Further complicating matters, this East Indies bird frequently appears in early modern texts on the natural history and materia medica of the West Indies. 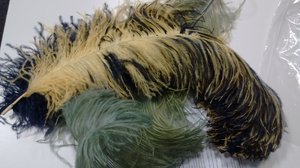 As part of the Basel-Bern-Cambridge research group Materialized Identities: Objects, Affects and Effects in Early Modern Culture 1450-1750, Dr Stefan Hanß has been working on feathers and feather-makers in Venice, Nuremberg, and Spain. The global trade in feathers and prepared featherwork was highly lucrative, and artisans had to be highly skilled and specialised when processing the feathers. Dr Hanß examined urban regulations and social networks of these prosperous artisans in Nuremberg. The highly praised iridescent feature of feathers could fade due to water or excessive light so had to be treated with care. Being natural objects made of protein, they were also susceptible to vermin. It took years of training to learn how to properly prepare, dye, and curl the feathers. In addition, the feathers might be stitched with wire, have spangles or gold and silver thread attached to the individual feathers, or gold leaf might be applied to the spine. The feathers could be sewn together in a panache and then attached to hats. Apart from these complex and creative skills, feather-makers often had to access to the trade in indigenous featherwork from the New World, which was highly desired by collectors for their cabinets of curiosities.

Dr Hanß described the feathers in the inventories of four Venetian feather-makers. This evidence underscores the sheer wealth and number of available feather products. For example, one feather-maker had over 12,000 feather products inventoried at his death in 1647. These included manufactured products such as feather fans and ostrich feathers that had been starched, dyed in a variety of colours, and sewn together. Ostrich feathers dominate the inventory lists but other feathers and taxidermy products that were available include egrets, cranes, parrots, swans, and herons.