Thimbles, Rings, and Other Things

The Renaissance Skin team had a busy start to the summer and we continued in our efforts regarding material things by visiting the British Museum (BM) on 3 July. The trip was first prompted by Juliet’s interest in thimbles, as she embarks on her research to uncover ways in which the human body was protected in the early modern period. A little-known fact, but the BM can lay claim to holding the national thimble collection. Not wanting to pass up the opportunity to see other objects of interest, we each offered a wish list that comprised a wide range of goods. Not all items were available on the day in the Britain, Europe and Prehistory study room. A leather wrist guard discussed by Juliet is on permanent display in the galleries, while a wooden and reindeer-skin drum made by the Sami people from the 16th or 17th centuries and a 17th-century leather shoe with its wooden and leather overshoe were inaccessible due to their imminent move to the World Conservation and Exhibitions Centre (WCEC), both likely frozen in storage. Nevertheless, we were still able to handle some fascinating pieces. 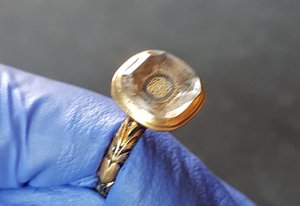 Taking the theme of bodily protection, and as and expert in Renaissance jewellery, Natasha had selected several rings for us to examine. First up were two 17th-century, silver decade rings (AF.954 & AF.959). Catholic decade rings, also known as rosary rings, have 10 projections and are used when repeating the ten ‘Hail Mary’ prayers. Secondly, we studied two amulet rings made of silver and toadstone (1858,0628.1 & AF.1024). Despite its name, toadstone is not connected to amphibians. It derives from the fossilised remains of fish teeth, and both magical and medicinal properties were attributed to it in the early modern period, including the belief that it could cure kidney disease and detect poisons. Our survey of rings concluded with three, gold mourning rings with hair set into their bezels (AF.1591, AF.1566 & AF.1567). Hair taken from the head of a loved-one, intricately plaited and incorporated into jewellery has appeared throughout history. As a relic it acted as a protective charm and kept the physical presence of the deceased close to the wearer. These rings served as a useful insight into how protecting the human body can encompass religious, corporeal, and temporal forms. 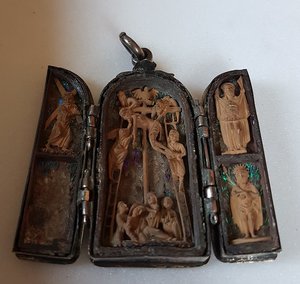 Staying with the theme of religious protection we also examined a miniature silver triptych (see image). Originally made in Mexico in the sixteenth century and designed to be worn as a pendant, the triptych opens to reveal a minute wooden carving of Christ’s descent from the cross, the road to Calvary, St Veronica, and Christ as Man of Sorrows. One figure is missing. Barely visible to the naked eye, but Natasha had thoughtfully brought her loupe, we were able to see that the background was originally set with hummingbird feathers. This brightly coloured and iridescent composition of feathers, juxtaposed against the silver and wood, created a unique and beautiful piece for early modern consumers keen to acquire objects from the New World.

The final item of jewellery was a silver-gilt watch-case with an outer case covered with shagreen. Created from the untanned skin of sharks or rays, shagreen is characteristically both strong and flexible, with a beautiful green colour and unique patina and sheen. It is often incorporated into early modern items of jewellery, in particular watch cases, trinket boxes, and small sheaths. 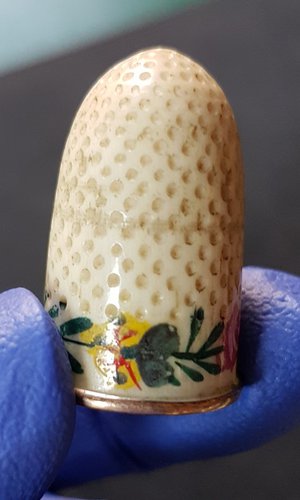 Having written previously on archers’ wrist guards, Juliet was keen to see an early 16th-century example and she was able to demonstrate to the team how it was worn. The main purpose of the visit, however, was to examine the museum’s thimble collection. Small, ubiquitous, and often overlooked, thimbles are used to protect the index finger (recently proven to be one of the most pain-sensitive areas of the human body) when sewing. The Museum’s collection includes thimbles from pre-history to the modern era made from a variety of materials including, bone, silver, and ceramic. Of particular interest to the team were the Nuremberg thimbles (see for example 1856,0701.3010) and a bone thimble with a gilt-metal rim and painted with a floral frieze (see image) 1921,0217.16. A piece for the website on thimbles and protecting fingers is forthcoming.

A final item on our list was a 17th-century tapestry screen, thought to have originally formed part of a fire-screen. As our theme encompassed protecting the body or skin, a fire-screen may seem an unusual item to be included for study. However, these were commonplace in early modern homes, where they were placed strategically to protect people sitting around a fire. In particular, they were favoured by women who wished to stop their skin from reddening due to excessive heat. This specific screen was embroidered with scenes from the life of Abraham, but Kathleen was quick to identify several images of animals and Paolo found a depiction of cheese – something for everyone!

Protecting the body and, importantly, its external skin takes on many forms. Our visit to the British Museum helped to increase our understanding of the abundance of material culture around this theme.

Our thanks go to Virginia Smithson from the British Museum for providing access to the items for our study.