Sausages, Research & Consumption - an evening at The Ginger Pig

The seventeenth-century painting ‘Sausage Making’ by the Flemish artist David Teniers the Younger (1610-1690) sent the Renaissance Skin team on a mission to understand how animal skins and casings were stuffed and cooked in the early modern period. The painting, part of the collections of the Kunsthistorisches Museum in Vienna, depicts an interior scene with a young woman preparing sausages at a wooden table. The table is spread with her equipment and ingredients, an eviscerated pig’s carcass hangs from a large hook, and a cat is eating scraps of meat under the table. The cook’s attention is being distracted from her task by a boy and a dog. In the background, another woman is serving men seated around a second table, while in the corner a man relieves himself into a large pot.

To get a better understanding of this image and the use of skins and casings in cooking during the sixteenth and seventeenth centuries, we opted for some hands-on experience. And so on 2 July 2018, we found ourselves at the Ginger Pig for one of their sausage-making courses to investigate the process, with the added enticement of eating our research at the end of the evening – what’s not to like? 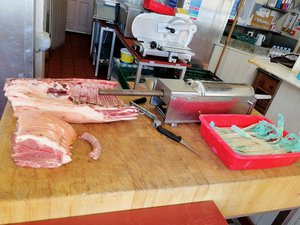 Sausage-making at the Ginger Pig, with the ingredients and equipment ready 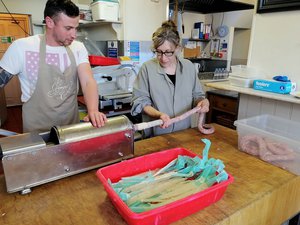 Hannah passing the meat through the machine to fill the casings 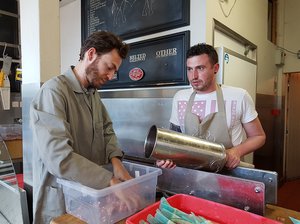 Paolo filling the meat mixture into the machine

Our evening at the Shepherd’s Bush shop was hosted by Daniel, a butcher with 23 years' experience and originally from Romania – where, he told us, ‘pork is king’. He began by explaining why pork shoulder (sometimes called ‘picnic pork’) is the best cut for making sausages. Since it is a working muscle, it has a good meat-to-fat ratio to give the sausages their flavour and keeping them moist. The meat is then ground to a chunky consistency and some ‘back fat’ or ‘hard lard’ is added to the mixture before it is seasoned with salt, pepper, garlic, and fennel to make a classic Italian sausage. We also made a smaller quantity of beef sausages, using a mixture of ground-beef shoulder, chilli, salt, and pepper. Ginger Pig sausages are gluten free, so made of pure meat with no added filler. However, some butchers argue that a couple of handfuls of dry breadcrumbs will help absorb the fat, giving texture and evening out the meat juices. It’s a question of preference, but the overuse of filler produces poor quality sausages. 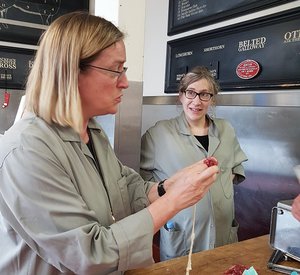 Our task was to insert this mixture into natural sausage skins, called ‘hog casings’, which are made from pigs’ intestines (although sheep intestines are used also), and are made up of naturally occurring collagen. In essence, they are edible membranes, which are flushed, washed and pre-soaked to make the skins soft and pliable. Their resemblance to prophylactics is unsurprising as early condoms were made from animals’ intestines. At the Ginger Pig, Daniel demonstrated how to attach the casings to the sausage-stuffing machine, essentially a large, metal syringe with a spout attached at one end. It was harder than it looked and was definitely a two-person job, as one person was needed to turn the handle while a second fed the meat mixture into the casings. 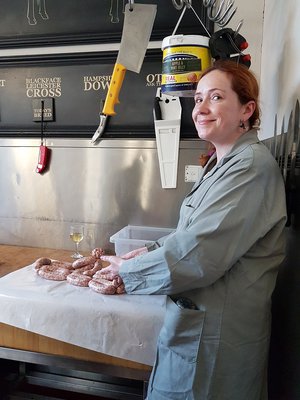 Kathleen finishing the sausages by bunching and twisting them, ready to eat! 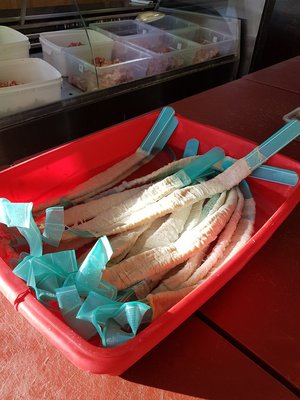 The sausage skins, or hog casings

As the mixture was extruded it needed to be carefully guided into the tubes and squeezed gently to ensure an even fill without air pockets. Evelyn was keen to try stuffing the mixture into the casings without using the sausage-stuffing machine, as Teniers’ painting appears to show the cook stuffing a casing by hand. This method did work, but the process was messy and laborious. We concluded that a funnel of some variety was probably used, but more research is needed on this. Finally we bunched and twisted our sausages into neat lengths to make glistening ropes of meat.

The evening finished with a meal of sausages (what else?), mash, coleslaw, and a delicious dessert of bread and butter pudding, all prepared by Daniel. We came away not only with a clear understanding of sausage production and several bags of sausages, but also a desire to pursue this subject further and will be researching contemporary recipe books and images for both sausages and other comestibles that were stuffed into skins and casings in the early modern period.