'From Past to Present' - notes from a conference

On 15 February 2018, Kathleen gave a paper at the one-day conference 'From Past to Present: Natural Cosmetics Unwrapped', held at the Royal Pharmaceutical Society in London. The conference was organised by a team of scholars from the Universities of Oxford, Glasgow, and Keele. Read her thoughts on the day below.

The premises of the Society are highly recommended for those interested in the material culture of pharmaceuticals. There is a wonderful permanent display of items from early modern ceramic apothecary jars, scales, and moulds to advertising - including one for an ‘arsenic face cream’ - and Victorian electric hairbrushes. Particularly eye-catching was the collection of ceramic containers of all sizes in the shape of bears which were used to store bear grease, a popular hair pomade used right up to the early 20th century. 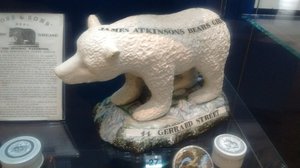 The aim of the conference was to examine the history of cosmetics from an interdisciplinary perspective, through the lenses of history, archaeology, chemistry, and classics. The first session examined the archaeological, historical, and literary evidence regarding cosmetics. Dr Francisco B. Gomes (University of Lisbon) discussed the distribution and dating of cosmetic containers - the Phoenician 'oil bottles' - in the southern Iberian Peninsula during the Iron Age. Dr Mira Cohen Starkman (Wingate Institute, Israel) introduced the audience to the long tradition of beauty recipes in Ladino (Judeo-Spanish) literature, which have been studied very little until fairly recently. My own paper focused on the text De decoratione (On Adornment) by the noted physician and university professor Girolamo Mercuriale (1530-1606). His work focuses on removing the so-called ‘defects of beauty’ from the face and hands. I examined the sixteenth-century learned medical humanist approach to ‘beauty’, with particular analysis of two chapters - on wrinkles and on youthful acne - that exemplify Mercuriale’s approach. These were discussed alongside similar texts on adornment by other learned physicians. 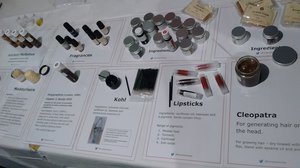 The second session was devoted to the scientific analysis of ancient and historical cosmetics, which revealed a variety of cutting-edge technologies used by archaeologists and chemists to analyse, date, and identify (if possible!) organic matter found within cosmetic containers. Professor Josefina Pérez-Arantegui presented the findings of a team from the Universities of Zaragoza and Pisa who analysed tiny samples extracted from small vessels and tools excavated from Roman and Islamic archaeological sites in Spain. The team used a variety of methods on this material, from optical and electron microscopy and X-ray to mass spectrometry and pyrolysis-gas chromography). Dr Maria Christina Gamberini (University of Modena) presented a study of samples from both Punic and early modern cosmetic containers that had been subjected to infrared spectroscopy, Ramen microscopy, and spectroscopy. Dr Effie Photos-Jones (University of Glasgow) discussed the analysis of pellets of moulded lead carbonate found within archaeological sites. These pellets would have been used as a face whitening cosmetic in Ancient Greece.

The final sessions featured papers on the development of modern cosmetic lines (Judith Wright, Archivist at Boots UK), hair-loss remedies (Peter G. Homan, British Society for the History of Pharmacy), toothpastes (Anisha Gupta, King’s College London), and the adoption of the work of the Greek physician Pedanius Dioscorides within early modern English herbals (Julie Wakefield). The day ended with a lecture by James Wong on nature and ethnopharmacology.

It was a fascinating conference to attend, particularly to learn about the efforts and techniques of several teams to scientifically analyse the contents of cosmetic preparations found in archaeological deposits. As always, listening to papers from the Iron Age to the 20th century aids perspective. The conflict between what is medicine and what is cosmetic appeared in papers on Ancient Greece, my own, and one on products manufactured by Boots!