Within our research we are trying to incorporate the many varied types of animal skin, thinking about how they were used and exploited in the early modern period. A museum dedicated to all things leather is the obvious place to start. And so on 18 June 2018, the whole team headed to Northampton for a visit to the National Leather Collection. Here, the curator Philip Warner gave us privileged access to the collection and the museum’s stores.

The National Leather Collection is located within the Grosvenor Shopping Centre in Northampton. It houses a collection of over 10,000 objects, each with a unique story and provenance. Philip began by giving us an overview of the museum’s history and a summary of the collection. Its origins were in 1946 when John Waterer and Claude Spiers were tasked with capturing the heritage of leather in Britain. With an initial donation of £5,000, the pair went about creating a museum that not only functioned as a collection but also incorporated research into leather design. The museum has examples of every type, variety, and shade of leather we could think of (and some we couldn’t). 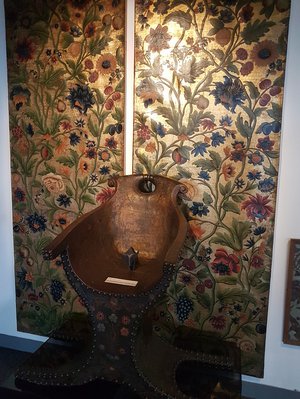 In one corner, a sixteenth-century Venetian gondola’s chair is placed in front of two beautifully gilded and embossed wall panels that are decorated with an elaborate, multi-coloured, floral and foliate design (see image). Sometimes referred to as cuir de Cordoba (as its manufacture originated in Spain), leather panels were used to cover walls as an alternative to wood or textile hangings. Very luxurious effects could be achieved with rich colours and patterned surfaces that often followed fashions in silk textiles. Frequently, the panels were embossed. Traditionally, this was achieved by pressing wet leather onto a raised wooden mould,. However, by the first half of the seventeenth century, embossing techniques involved pressing leather with a heated metal plate. This made it possible to produce large numbers of identical, finely-detailed panels. Leather panelling, while beautiful and decorative, was also extremely versatile. It could decorate rooms, exclude drafts, provide insulation, and it was highly portable. 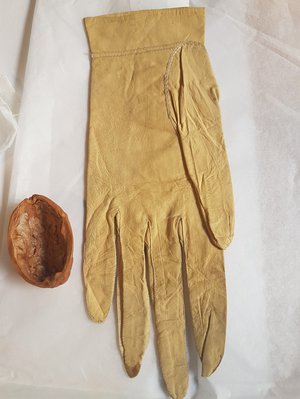 A 'chicken skin' glove alongside a half walnut shell that it would have been sold inside. National Leather Collection, Northampton

Philip had kindly produced a selection of items from the museum’s stores that we had requested to view. Evelyn had asked to see a ‘chicken skin’ glove (see image). Despite its name, it is made from thin but strong leather derived from the skin of unborn calves. It was usually sold encased in a walnut shell. As historians of early modern medicine, both Hannah and Paolo were particularly fascinated by the sixteen-century Jewish pouch for holding the medical instruments required to perform circumcision. Paolo also requested to see a fifteenth-century, Florentine leather shield. While these two items differ in size, shape, and function, both were made using the cuir bouilli technique. This involves saturating vegetable tanned leather and then allowing it to drain until it is damp but does not exude water. In this state, the leather is pliable and can be moulded and shaped before being dried. The resulting leather is hard and resilient, idea for use in the Renaissance for armour and protective casings. 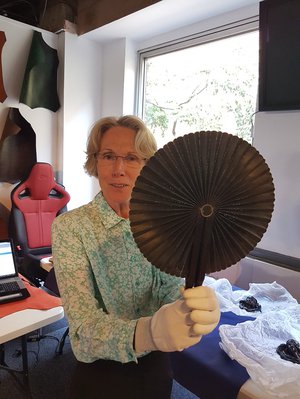 Juliet holding up a a fire-screen fan, designed to protect the owner's complexion when seated before an open fire

The seventeenth-century hawk’s hood reminded us that animal skin was not only used to protect humans. The leather and feather hawk’s hood, or ‘rufter', is strikingly similar to one illustrated in the portrait of Robert Cheseman and his falcon by Hans Holbein the Younger. Thought to have originated in the Middle East, hawks’ hoods were first brought to Europe by returning crusaders. They were designed to calm the bird, and the design has been altered very little in the modern day.

Other items of special interest to the team were the pieces of leather luggage, particularly the travelling trunk that belonged to Catherine of Braganza, and the small, but practical, fire-screen fan (see image). This was held in front of the face to protect the owner’s complexion from reddening from the heat of an open fire.

While the visit was primarily for research purposes, we also had fun exploring the stores and were intrigued by the Museum’s not too insignificant collection of fur coats donated by the Victoria and Albert Museum. Our research is often manuscript focused, but the visit reminded us of the important role that material culture plays in our project and for our understanding of skin in the Renaissance.

With thanks to Philip Warner for giving up his time, sharing his knowledge, and opening up the museum’s stores to allow us to explore these wonderful objects.