At the end of August, Kathleen attended a three-day course at the School of Historical Dress on traditional felt-making techniques tutored by Rachel Frost. Here, she tells us all about it.

The course focused on wool felting in early modern Britain, where the manufacture was focused on the hat trade. Felt is the oldest form of textile and consists of a compressed mass of fibres, using either the fleece of sheep, goats, or alpacas or the fur of beavers or rabbits. Naturally, the felt produced from these diverse animals has different textures. 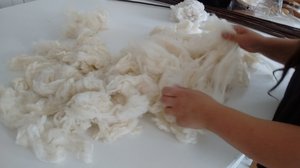 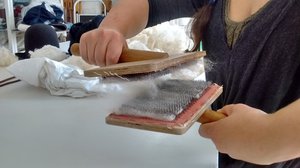 Preparation of the fibres is key. They must be gently teased with the fingers (see image), and can then be beaten with sticks to pull out the fibres. Up until the mid-16th century, British felts were likely prepared by hand-teasing and then carded with wool carders. The latter involves using hand carders - two wooden instruments with small wires on each side (see image). Moving the handles in opposite directions, the wool is carded and, when ready, the handles are moved in the same direction so that the wool is transferred from one side to the other. The aim is to break up the fibres and lay them parallel. The resulting carded wool is called a batt and is arranged on a flat surface in many layers (usually one layer in one direction and the next layer in the opposite direction, in a criss-cross fashion). 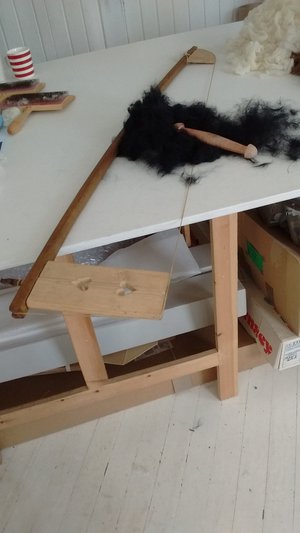 Demonstrating the use of a bow carder, with a wooden pin to hit the taut bow string and cause vibrations 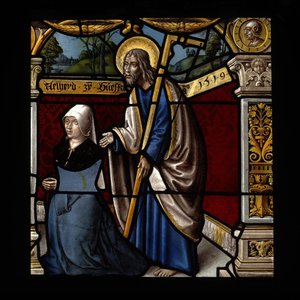 A finer felt can be achieved with the help of a bow carder, an instrument introduced to England around the second half of the 16th century by Huguenots in Suffolk (see image). It is a hatter’s tool, formed of a long wooden bow with a gut string at high tension. It is one of the attributes of St James the Less, who was martyred with a felter’s hammer (see image). Short fibres, such as lamb’s wool, cut short wool fibres or wool waste (noil), are essential to its use. For fur felting, the little hairs are shorn. With beaver fur (an important staple of the early modern hat trade), the beaver’s guard hairs (which are long and wiry) were first plucked out by hand. Only the down hair, which would then be shaved from the pelt, can be used for felting. The cut wool is laid before the bow carder. The felter plucks the gut string with a wooden pin, which creates vibrations and the wool is thus teased and ‘mixed’ up. Once carded in this way, the wool can be piled onto a surface ready for the next step.

Hot water or steam is applied, along with an acid solution or urine. For our purposes, we used the slightly less period alternative of soap flakes mixed with hot water. Once all the fibres are very wet, the process of ‘planking’ follows. This involves compressing and rolling the wool, usually with the aid of a long, thin wooden roller. A great deal of exertion is required at this stage until all of the fibres are pressed together.

The finished project, once dried, shrinks from the original laid fibres (usually 1/3 for wool and ½ for fur, which is lighter than wool). At the workshop, two samples of felt were prepared in the method above before we began on the felting of an early Jacobean-style sugar-loaf hat. 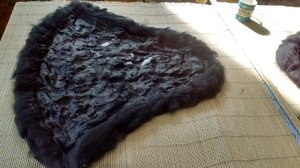 Dampening the wool fibres before planking

For my hat, many layers of very thinly teased fibres were laid out in a large bell-like shape, which was then wetted with hot water and soap. A pattern of this shape was laid on top of this first felt and another felt, in the same shape, was laid out on top with thin wool fibres, and then wetted with water and soap (see image). Strenuous ‘planking’ followed until the felted hat hood was created. This was cut at the bottom and the pattern removed (which had prevented the sides from sitting to each other until the felt was created from the fibres). 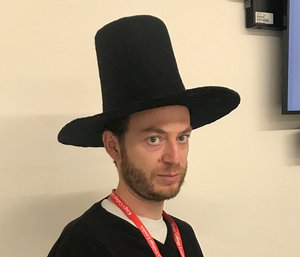 The hat was then blocked (with steam and irons) around a hat block, tightened at the bottom of the crown with a hemp pack-string. The brim was pulled, ironed, and steamed into the correct shape and then cut. The interior of the hat was stiffened with glue. Period glues including ones made from rabbits, wine lees, and isinglass from the swim bladders of fish. We used a glue that was a mixture of water, pearl glue, starch, tragacanth, and vinegar. 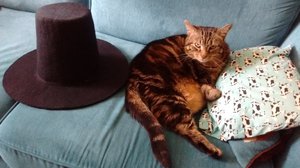 The finished hat with a size comparison

As the hats dried, workshop participants studied techniques to raise the nap of the finished felt with teasels or a wire comb if desired. Loose hairs could also be sanded off or burnt off with a candle flame. I chose to do the latter with my hat! Decorative techniques such as thrumming (little cut loops on the felt in either silk or wool threads) or a braid edging made by looped thread manipulation were also studied and practised.

For further information on the School for Historical Dress and the courses that they run, see here.