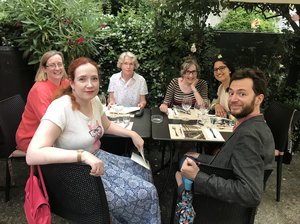 Dinner on the first night in Bologna

In June 2018, the whole Renaissance Skin team visited Bologna, Italy for a group research trip. Over 2 days we packed in a lot of culture, walking, and importantly, food! The visit was meticulously planned by Natasha and Paolo (Bologna resident), and true to our foodie ambitions we began at Osteria Santa Caterina for an excellent meal and to discuss our itinerary.

Prepared for a long day of walking, we set off early the next morning and headed directly to the Archiginnasio. Originally commissioned by Cardinal Borromeo between 1562 and 1563 and designed by the architect Antonio Morandi, the Archiginnasio housed the library and main lecture hall of the University of Bologna until 1803. Here, our primary interest was the Anatomy Theatre. Designed by Antonio Paolucci in 1637 and built in the shape of an amphitheatre with a central, white marble table, the theatre was used to demonstrate the dissection of both humans and animals (see image). 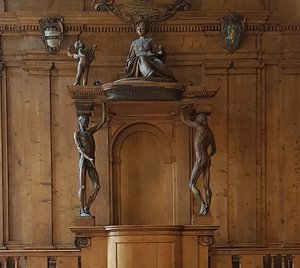 'Spellati' (skinned statues) flanking the teacher's desk, surmounted by the figure of Anatomy 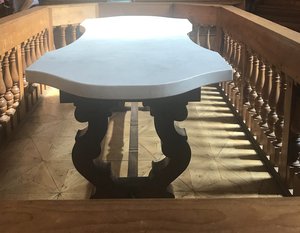 Table centrally placed within the Anatomy Theatre of the Archiginnasio

Although it was extensively bomb damaged during the Second World War, the theatre was rebuilt using original materials. Remarkably, the 18th-century carved statues of Hippocrates, Mondino de Luizzi and Galenus were recovered from the rubble and returned. Of particular interest to our project were the two statues of the Spellati, or skinned statues, that flank the cattedra del lettore (teacher’s desk). These were sculpted in 1734 and were based on the drawings of Ercole Lelli, a renowned wax-modeller from the Istituto delle Scienze. These two, anatomically-correct statues hold up a wooden canopy from where the theatre is overseen by a carved female figure representing Anatomy. A putto stands to her right and offers the gift of a thigh bone, an appropriate (if somewhat unusual) token (see image). For a team of researchers interested in all aspects of skin in the early modern period the theatre was the perfect introduction to our visit. 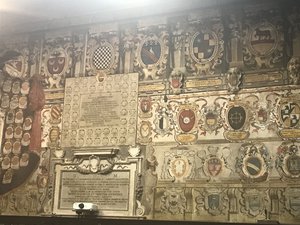 Coats of arms cover the walls of the Archiginnasio

Exploring further we walked up the two grand staircases that originally connected the separate university faculties and admired the heraldic wall complex. The coats of arms commemorate both the university’s lecturers and students, and cover nearly the entire wall space of corridors, staircases, and into the hallways. Kathleen was fascinated to see the enormous variety of animals that were depicted in these heraldic devices, especially the porcupine (see image). 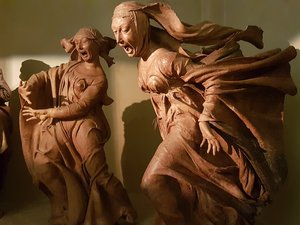 Two of the terracotta statues from the Il Compianto by Niccolò dell'Arca in the Santa Maria della Vita, Bologna

After a short detour for Evelyn to show us the beautiful terracotta statues by Niccolò dell’Arca in the Chiesa di Santa Maria della Vita (see image), we moved on to the Palazzo Poggi, the headquarters of the University of Bologna and home to both the Aldrovandi Collection and an important assemblage of anatomical wax models. While the team has not focused on aspects of pregnancy or birth in the Renaissance, we were interested to learn how these gynaecological wax models were of particular importance in improving both maternal and infant health. The collection of the naturalist Ulisse Aldrovandi was equally fascinating, and the team enjoyed viewing at first hand so many of the objects that we had previously only seen in books or online. 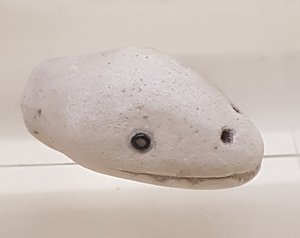 One object of particular interest to Juliet was a small snake’s head, moulded from white terra sigillata, a type of ceramic that was attributed with medicinal properties (see image). As an anti-venom charm it was believed that it would cure a serpent’s bite and, while its actual medical properties were questionable, it reminded us all of the healing power that can be played by a placebo.

The team was joined at lunch by Professor Monica Azzolini, who is currently working on natural disasters in the Renaissance, and we were able to exchange notes and discuss mutual areas of research before moving on to our afternoon’s itinerary, which started with a visit to the Museo Civico Medievale. Located in the Palazzo Ghisilardi-Fava, the Museo Civico houses a fascinating collection of objects that contribute to the history of Bologna. There is a beautiful collection of armour (vital for protecting skin when jousting or in actual battle) as well as items of ivory, glass, ceramic, and sculpture. A rhino-horn cup immediately caught Kathleen’s eye, although we were all surprised at how accessible it was, particularly given the value of rhinoceros horn and that items of rhinoceros horn have recently been stolen from other European museums. The first room of the museum includes pieces from Ferdinando Cospi’s (1606-1686) Wunderkammer, a collection filled with everyday objects from across the world, from Venice to Beijing, as well as animal and herbal objects. Cospi was a collector, natural historian, diplomat, and senator of Bologna. He donated his collection of archaeology and natural history to the city and had it recorded in the Museum Cospianum, a printed illustrated catalogue (1677), which is also on display. The collection was later added to Aldrovandi’s to form the core of the natural history museum in the 19th century.

Our final visit of the day took us to the Corpus Domini Church for a viewing of the uncorrupted or embalmed (depending on your personal belief) body of Saint Caterina Vigri (Catherine of Bologna). The church itself was initially constructed in the fifteenth century, although the interior was significantly altered in the baroque style during the seventeenth century. it remains part of an active monastery complex of the order of Clarissan nuns. After a short wait, one of the sisters unlocked the chamber and allowed us to view the enthroned and mummified corpse of the saint. Caterina was born in Bologna in 1413 but was educated at the court of Niccolò III d’Este, where she waited upon Margherita d’Este. She retired from court at only 13 and, aged 20, entered a community of Poor Clares in the monastery of Corpus Domini at Ferrara, later setting up a branch of the order in Bologna. She died in 1463 and her body was later dissected and declared uncorrupted. Sadly, as modern scholars, we were less inclined to believe in the ‘miraculous’ preservation of the body and were more interested in the embalming techniques that had been used. For although the skin of this saint had been preserved, it had become darkened, exactly the colour and texture of a piece of old leather – which is exactly what it is. Tired, we retired for another delicious meal and were so exhausted that we were hardly disturbed by the huge thunder storm that deluged the city overnight.

The following day a short bus ride from our hotel took us to the Museo Del Tessuto e Della Tappezzeria ‘Vittorio Zironi’. Housed in the Villa Spada, the museum holds an extensive assembly of fabrics and period looms. Sadly, the museum is in need of funds as the previous night’s rain revealed some alarming holes in the roof. Of primary interest to the team was the museum’s collection of leather items and the wooden patterns that were used to emboss hides before they were used either for furnishings or decorative wall hangings. This style of decoration is achieved by ‘blocking’, a process that involves stamping wooden or metal patterns onto dampened skins from the flesh side to raise the design on the grain and bring it into relief (see entry on leather wall hangings). In contrast to the mechanical and physically demanding embossing process, the museum also displays a small piece of white alum-tanned goat skin, which had been delicately embroidered with foliate and flower designs, and was originally used to upholster the arm of a chair. These two juxtaposing techniques showed us the versatility and variety of decorative techniques that can be applied to animal skins. Fortunately for the team our trip coincided with a visit to the museum by Nicoletta Di Gaetano, an expert weaver who gave us a fascinating demonstration using one of the museum’s period looms (see video)

After a quick pizza at Forno Brisa, which Paolo reliably informed us had the best take-out pizza in Bologna (and he should know), the visit concluded with a team research meeting before making our way back to the airport and home.